This picture was taken along Monk Street in the Glebe. When you come off of 5th Avenue or Wilton Crescent, Monk Street is signed as a bike route. But just how serioualy does the city take their bike routes? It seems to me from looking at this photo (look all the way up the street) that bike lanes are just parking spots. Parking control officers are very prevalent in the Glebe but they obviously turn a blind eye to this sort of thing. When will the city get serious about these infractions? Parking in the bike route.
Posted by Ottawa bike guy at 3:11 PM 2 comments: On a recent visit to Bridgehead's roasting house coffee shop I couldn't help noticing the indoor bike parking for employees. At one point there were 5 bikes and 5 employees visible. Outside, the bike racks were all occupied. Bridgehead has always impressed me with their concern for the environment and this is just one more example. A certain downtown coffee shop that promotes the removal of the segregated bike lane could certainly take a lesson or two from Bridgehead.
Posted by Ottawa bike guy at 12:39 PM 2 comments:

Ottawa bike guy is not normally in the habit of deviating too much from the script. That’s to say that the blog is pretty much focused on bike-related issues here in Ottawa. I haven't done any reviews of cycling movies or books and have no plans to start doing so. However, not one to be too rigid I will make an exception on this occasion and venture into the realm of the music reviewer. But just this once. Or until I'm sent another freebie! 
Recently I was sent a copy of the CD “bicycle” by Nora and One Left from Washington D.C. Had it arrived at the beginning of the summer it could certainly have been the soundtrack for my summer. I’m not sure when I last heard such an infectious pop album.

The World is a Wonderful Place is an upbeat ditty and a good antidote to all the garbage going on in the world today and a great way to kick off the disc. Track two is the first of many bicycle-related songs and what a Cycle Chic song it is. Take a tour around the Cycle Chic world through the lyrics and try to see if you don’t want to hop on a bike in some of the great cities of the world. Trevor Exter’s cello opens the next bike track, A Winter’s Ride. This was the first track (but not the last) where I thought I might be listening to Leigh Nash of Sixpence None the Richer. Riley McMahon’s twangy guitar work on this song blends so well with the cello. I’m thinking we don’t hear enough cello in pop and rock music these days!

Big Red Bicycle is one of those sing-along good-time Christmas songs. Who wouldn’t want a big red bike? More twang here (by the way, I love twang) mixed in with what I’m pretty sure were sleigh bells. Out in the Rain, while superficially a bike song, is a bit more hard-edged with some great guitar work and a solid driving (or maybe I should say, cycling) beat!

Things slow down a bit with So Far Away. A beautiful plaintive call for a loved one to come home. Nora Schlang has a heck of a voice and it’s at its finest form on this song. The Morning Sun with its banjo and accordion, chimes in with a bit of Celtic feel but also with very much the folk sensibility (and a hint of his vocal timbre) of a Steve Forbert song.

My Bike and Me is the album's anthem. All ringing guitar and positive bike propaganda. If I was inclined to ride around town with speakers blasting from my bike this would be the song playing. A cycle anthem for the ages!

Nora and One Left have put together 14 wonderful pop songs that blend and flow as well as the instruments of the multi-talented band members. Give it a listen and then get out and ride!

Have you been to Van Gogh yet?

The Van Gogh exhibit at Canada's National Gallery is a wonder and well worth the visit. Seeing all his wonderful paintings reminded me of these bikes that were at Ottawa City Hall a few weeks back. I wonder what became of them? One of my complaints about Ottawa has always been the lack of waterside amenities. Where can you stop for a drink or a bite while you're out biking in this city? Well, the NCC has surprised me this summer. First, we had the NCC allowing ice cream vendors along the multi-use pathway. Today, I noticed a "pop-up" bar across from the Congress Center. Not elaborate by any stretch but a nice little spot to watch the world go by and have a drink at the same time. Even more exciting is a new seasonal restaurant/bar being built just north of the Corktown Footbridge on the Colonel By side of the canal (along the multi-use path. Bikes everywhere or are my eyes deceiving me?

Recently there's been some ratcheting up of the complaints about the Laurier Avenue Segregated Bike Lanes (LSBL) in the local media. A recently formed coalition of citizens opposing the lanes claim that the city is fiddling with the number of users for the bike lanes and that these numbers are exaggerated. Today in the Ottawa Citizen one letter writer, incredibly, stated that only about 25 people use the lanes per day. I probably shouldn't have mentioned this comment because it's beyond ludicrous but this is the sort of thing being tossed around by bike lane opponents. Interestingly, a recent comment to this blog complained about having to deal with the "thousands of cyclists". Too many, too little...I guess they can't decide. On my way down Laurier West today I did a rack by rack count from Kent Street to Elgin Street. Every single rack, without exception, had a bike attached and most had two or more. In total, I counted 220 bikes. This does not include any bikes on any of the north or south running streets that were visible to me. Now imagine if all these cyclists were to drive instead! Where would they find the parking? Three on a bike

Recently there appeared a comment in the local paper pointing out the disadvantages of a bike vs a car. The anti-bike author expressed a very North American bias about bikes. Basically he said you can't do that much with them. They can't carry groceries (mine does) or they can't transport children. He specifically said two children so I thought of his comments when I saw this cyclist last week with two children on board. Nicely done too! 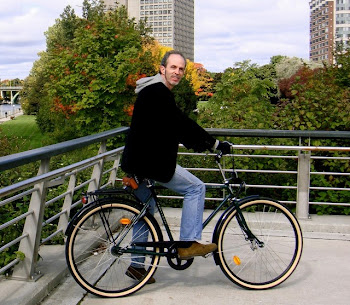 Ottawabikeguy is a member of Citizens For Safe Cycling. Are you? 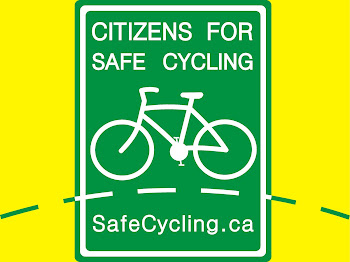